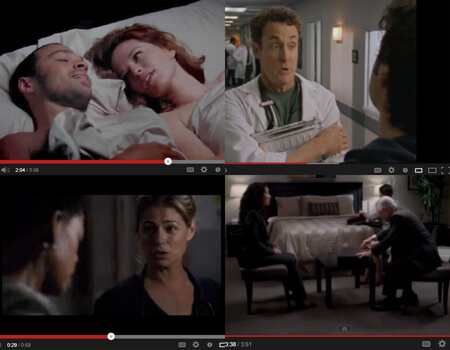 Whether you can’t get enough of them or whether you never watch them (“who wants to stress out more about patients after work” and “they’re so fake!” are frequent refrains), medical dramas have started to shape public and medical professionals’ perception of the healthcare industry.

But just where do TV medical shows cross paths with real life careers of doctors and nurses (and where don’t they?)

A 2004 study published in the Journal of Surgical Research found evidence to suggest that TV shows like ER and Grey’s Anatomy affected surveyed medical students’ decisions to enter surgery.

Some of the students interviewed in the study basically thought surgeons were self-absorbed jerks, who either didn’t have families or had horrible relationships with them.

But how close are these TV-based perceptions to reality?

Here’s a look at five portrayals of life as an intern, resident, and first-year nurse on TV, as well as how closely they line up to reality:

Portrayal #1: You can sleep your way to awesome, career-making surgeries (Grey’s Anatomy)

…Even well-established characters on Grey’s have gotten tangled up in such on-screen messes: Before getting hitched and starting a family, Derek Shepherd had a blowout with fellow doctor Miranda Bailey over him favoring Meredith for surgeries “Next time I see you favoring Meredith Grey in any way, I’ll make sure she doesn’t see the inside of an OR for a month, just for the sake of balance,” Bailey threatens him.

To understand why this post-grad myth is so ludicrous, we need to take a step back to look at the likelihood of constant real-life hospital hook-ups, where it seems “everybody on staff is always with somebody else on staff…”

“… It would be pretty scandalous if an attending and a resident got together,” says 4th year Columbia medical student Marianne DiNapoli on her blog. “I’m not sure I’ve ever heard of it happening (which means it either doesn’t happen a lot, or when it does it’s hush-hush).”

While some doctors admit the hook-ups do sometimes happen, the hectic pace of the ER and the OR means there’s far less time (and energy) for this to happen than in practically any other workplace.

Portrayal #2: Nurses can train to and become doctors on the side in a couple of years (ER)

In the fictional world of ER, nurse Abby Lockhart seems to transition from being a nurse to being a physician in a matter of about 4 years. While this would not be possible in real life (especially while working full-time as a nurse!) careful recreation of this character’s career timeline reveals that Abby was a med-school student before dropping out to work as a nurse (in order to pay for her husband’s med school education.)

After divorcing said husband, Abby resumes her training at County General – the same fictional Chicago hospital where she worked as a nurse. Translating the show’s seasons (6-10, or 1999-2003) in which she resumes her training and finishes med school Abby becomes a resident in 2004 through 2007 and is offered a job as an attending in 2007 (season 14.)

This may seem like a short time, considering that she is working as a nurse for part of the resumption of her med school training, AND keep in mind that a year’s TV season doesn’t necessarily represent a year in the lives of the show’s fictional characters. (While it could actually represent less or more than a year, references to current events throughout the TV run of ER suggest that 1 season = 1 year in the real world, more-or-less.)

Speaking of which, the real-world path for nurses who want to become physicians involves having (or getting) your BSN, studying like crazy (having a medical background does not instantly entitle a nurse to a spot in med school, though some do give extra consideration to existing RN experience) taking (and passing) the MCAT, nailing med school entrance interviews, and being prepared to spend years of time and loads of money on med school.

Another avenue to consider: foreign med schools (which sometimes have lesser entrance criteria and competition) but be sure to confirm that the state you want to practice in recognizes that school.

All-in-all, and your nursing training may shave a year or so the additional time it takes to go through med school and residency, but otherwise, count on adding the entire 4 years of med school and 1-8 years of residency to the time it took you to attend and graduate from nursing college.

Finally, there’s also the option of transitioning from RN to nurse specialist, nurse administrator, nurse faculty or nurse practitioner (which has some of the authority of a physician and pay in-between that of an RN and GP.)

Portrayal #3: Not every doctor passes their boards…at least, not the first time (Grey’s Anatomy)

Back to Grey’s, possibly the most white-knuckle episode of this show that doesn’t involve many operations or physical maladies is the recent 2011/2012 season storyline in which Cristina, Meredith, Jackson, Alex, and April take their boards.

After six hours of gruelling questioning, who knew who had passed and who had gone down in flames? As it turns out, the combative Cristina, nauseated (that’s putting it mildly) Meredith, flustered Jackson, and almost-no-show Alex all pass, while brown-nose April doesn’t.

What led to this outcome? And is it realistic in real life?

First of all, board licensing is voluntary – The reason most doctors do it is for third-party payers, insurance companies, and hospital admins (who’re more likely to promote someone who’s passed their boards.) Also, increasingly, being board licensed is becoming a requirement for getting and staying employed as a physician.

In terms of the exam, one of the common places where those who don’t pass get stumped is in questions that cover multiple clinical areas at once, as well as ones that don’t pertain to traditional internal medicine (which can comprise up to 25% of questions in the average exam.)

Also, while you’d be rolling the dice to just review these niche areas, most board subspecialty questions involve cardiology, gastroenterology and/or pulmonology.

One useful way to help your chances of passing is to participate in study groups. Another is to take a review course, though these can be pricy and will never replace consistent, disciplined study.

More suggestions for increasing the odds for passing medical boards

Example board exam questions (and how to go about answering them) Don’t want to register? Try this site

A strategic guide to taking the boards

…and here’s a look at how CNN medical correspondent Sanjay Gupta passed his boards in 2006 as well as more on board certification in the U.S.

Around the time that Journal study was done, vacancy rates for coveted and highly-competitive surgical residency spots in U.S. hospitals rose from 1.5% to 6.5%. (Though, to be fair, the following year, that vacancy rate had plummeted to 0.2%.)

While the med school students acknowledged that they were basing their decisions on TV characters, many of them admitted they still had grown (again, admittedly, via TV) to think of surgeons as emotionally unavailable tyrants to both their co-workers and families.

The students also feared how these hot-shots would treat them in the field as attendings, potentially scaring away many promising students from the profession, for fear of having to work under and later become one of these monsters.

As it turns out, this fear may have been boosted by TV dramas, but it’s one that’s not unfounded, according to interns, residents, and doctors.

“Depends on the attending, but yes, this does actually happen,” says DiNapoli. “It can be uncomfortable,” but she adds that just as many surgeons are as supportive and eager to teach as they are competent.

Portrayal #5: All nurses in hospitals are strictly RNs and are not trained to do high-level patient care

One of the cardinal sins of practically every medical show since M*A*S*H* – the truth anyone who’s spent time in a real hospital will tell you is that real-life nurses do most of the things you see TV doctors doing outside the OR.

While the doctor usually has the final say, it’s a nurse you’ll see and deal with most in a hospital. In addition to all the bedside “housekeeping” and medication administering that viewers see nurses doing on TV, these dramas usually fail to show nurses as the people who start IV lines, draw blood, insert catheters, order labs, and do many more high-level tasks.

“You never see doctors doing these things in real life…but there they are whenever its something interesting to show doctors doing on TV” says one medical blog poster of the true roster of high-complexity jobs that nurses are tasked with. “The ED and the ICU are very stressful places to work. You have to be a fast thinker who is not easily stressed and who always has a plan no matter what goes wrong,” says another poster of nursing.

Outside the U.S. – in Canada for example – nurse specialists have even more autonomy, and can perform a limited number of invasive procedures such as cardioverting dysrhythmias, performing arterial punctures, administering general anesthetics, starting peripheral IVs, performing complex wound dressings, and assisting with the insertion of external ventricular drains. Take that TV medical shows!