Taking a risk is tough, especially when you’re putting your career path into someone else’s hands. Sure, everyone likes to travel for vacations, but traveling to work and live in an area where you’ve never been for months at a time? Would that be safe? What would happen at the end of each assignment? What about insurance coverage and future job security? These were all the concerns from a respiratory therapist named Donna who’d been living in north Florida for 30 years before she decided to travel with Soliant. She never thought she would want a change from her stable position of >20 years at the same facility in Florida. This all changed when she connected with Matt Mitchell, a Soliant Nursing/Allied recruiter, this past December.

As a first-time traveler, Donna was fairly overwhelmed with questions of her own and nervous insecurity of how this process would go. However, after a few conversations with Matt, she gradually built her confidence in him based on how he communicated with her. From start to finish, Matt kept her updated with everything needed from new state licensure to new hire paperwork. Nothing was left unanswered, and any updated information on each assignment was communicated.

Donna says that every time they spoke, Matt was always positive and excited to hear how things were going for her. He made himself available anytime she needed anything. It was as if he and his team were her personal team. Being a traveler didn’t seem lonely as she originally thought, since she had Matt, who was the “nice guy you want in your corner. Matt was a good cheerleader, keeping me propped up during the experience.”  Though he was someone she’d never met in person, the voice on the other end of the phone felt like he was closer than he really was. 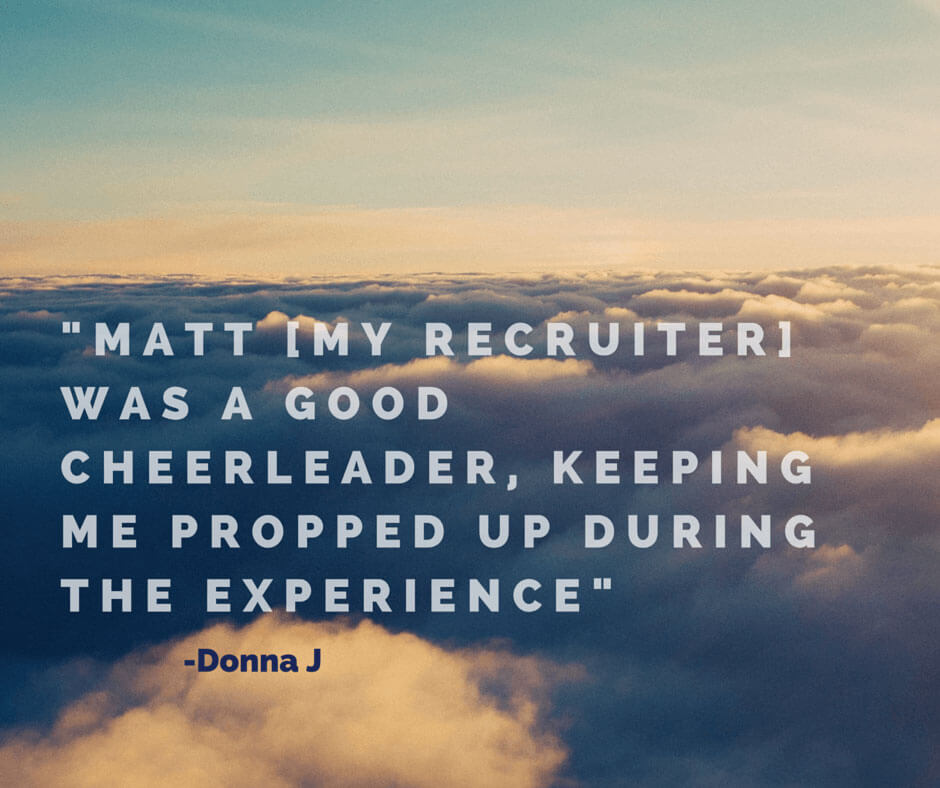 Donna had worked in Florida for more than 20 years, but is originally from West Virginia. When Matt approached her about an opportunity in Colorado, she dreamed of being back in a mountainous area and actually experiencing all 4 seasons, versus the continous warm temperatures in Florida. Though she’s nervous about her first winter in Colorado, she’s happy to be back in the mountains. Donna says she loves the mountains and hiking more than the beach, which made Colorado a great fit for her. She has been working in Steamboat Springs, Colorado for several months and is transitioning into a permanent position at the hospital.

Not only did Matt make this a smooth transition for Donna, but all of her fears were conquered! Job security, insurance, knowing she has supporters on her side, and being in a place she enjoys and feels comfortable. She wanted to make sure Matt received recognition for helping her find her new “home” in the easiest way possible. Curious about traveling but wary about not feeling supported and secure? As Donna’s story tells, our team will make sure you’re supported every step of the way. Check out our latest travel opportunities to start your new career venture!