When Did Nursing Begin?

Nurses all over the world work countless hours caring for the sick and wounded, and have done so for years. Though Monastic nuns and prostitutes had performed the duties we commonly associate with nursing since the Middle Ages, many people consider Florence Nightingale the founder of modern nursing. Her contributions to medicine and statistics tremendously changed the way the world looked at nursing, a career once thought to be a “man’s job.”

The start of a better healthcare system

During the Crimean War in 1854, Nightingale was sent to a camp in Turkey where she and her team of 38 volunteers immediately began cleaning and organizing the hospital equipment. This was one of the first steps toward better healthcare systems providing help to everyone who needed it.

The work Nightingale performed with others led to dramatic changes in the Army hospitals and sparked an overwhelming interest in the field of nursing. The statistical information she included in the detailed report composed for the Royal Commission on the Health of the Army had much to do with her success in further developing the field.

When nursing first began, how were they educated? 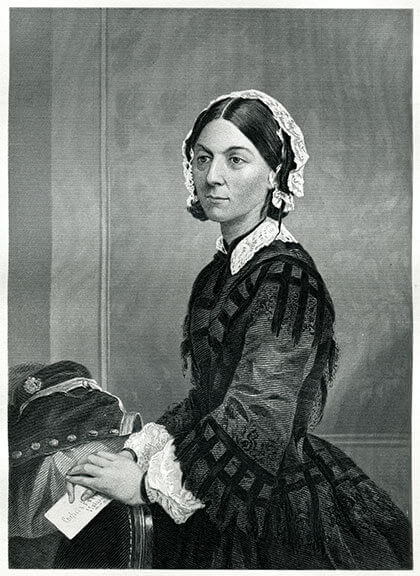 When nursing first began, interested candidates received their education from hospitals, where they often worked 12 hour days, seven days a week. During this time, trainees performed tasks such as cleaning, dusting, and doing the dishes. After two to three years, they were given more responsibilities, such as sterilizing hospital equipment and cleaning the operating rooms.

When nurses graduated, many of them moved on to work as private nurses in residences—for pay considered something comparable to today’s minimum wage. As private nurses, they tended wounds, bathed, and administered medication to their patients. As the field of nursing continued to grow, hospitals began to improve their quality standards, evolving from a place where the poor received care into a place suitable for childbirth and general care.

Nurses with knowledge of specialty care

At the dawn of World War II, many well-trained nurses were sent to assist with the war efforts, taking care of wounded and sick soldiers. The time spent assisting the military proved beneficial to them as many returned from the war with advanced knowledge and specialty training, in areas such as pharmaceuticals and psychiatry.

This prompted a governmental response and pumped millions of dollars into healthcare. As science and technology continued to advance alongside the pharmaceutical industry, there was an increasing demand for highly trained and skilled nurses. Soon, more opportunity for advancement surfaced, allowing nurses to choose a specialty area and even move into surgical environments. Along with these advancements came more responsibility for direct patient care.

Adapting to the nursing shortage

A shortage of nurses in the 1980s prompted the growth of traveling nurses. Nurses would travel throughout the country, working at various hospitals wherever they were needed most. Today, just like in the 1980s, the United States is facing a nursing shortage. According to the American Association of Colleges of Nursing (AACN), the RN workforce is expected to grow from 2.7 million in 2014 to 3.2 million in 2024, which is an increase of 16%. This expected growth is making travel nursing as important as it was in previous decades.

Today, the field of nursing would make Nightingale proud. The field is highly respected and still experiencing tremendous levels of growth. Men and women alike enjoy the career. Over 200 specialty areas exist in nursing, each now guided by federal, state, and local regulations to protect both nurses and their patients.

The right connection can make all the difference.

With the shortage of medical personnel growing, will the nurse practitioners (NPs) or physician assistants (PAs) replace the primary care physician in the future?

America is facing a healthcare crisis of unprecedented dimension, with a number of factors contributing to the impending healthcare worker shortage.